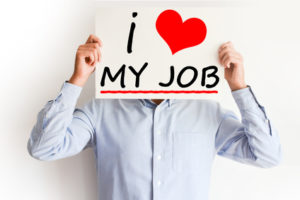 This is the true story of how Dan, a self-described introvert, harnessed the power of networking by doing three informational interviews a week, landed a six-figure job he loves – and even enjoyed many of the conversations!

How did he do it? I interviewed Dan to find out.

What was he looking for?

In 2016 Dan (not his real name) was unemployed, except for some sporadic consulting work. But given his strong track record as a manager and individual contributor in various nonprofit organizations, he didn’t feel desperate. Dan was looking for “the right job, not just any job.”

His requirements included the following:

Although he did some online job search, Dan decided that informational interviews would help him pinpoint the right opportunity. “I wanted to see what was out there and which organizations were the best to work for.”

How did he get 32 people to make time for him?

He let go of the idea that any particular meeting had to lead to a job. Instead, he decided to approach the conversations “in a spirit of curiosity, or as if I were a reporter.”

“That made it very low-pressure for the people I was talking to, as well as for me,” he said, adding with a laugh, “People like talking about themselves. Who knew?”

“It was really important to get introductions. Yes, I did some cold reach-outs, but mostly it was a matter of reconnecting with people I’d known in the past and hadn’t talked to in a while, especially people who were really smart or well-connected.”

Linkedin was a useful tool in this process. “I would look to see who was working where, or in what field. I joined a couple of relevant groups and then I looked up people in my network who were connected to any of these groups.” This made it easier to reach out to these people, who were now fellow group members.

What kind of questions did Dan ask?

He asked his interviewees about their background, how they got started in their career and job, and what they liked and didn’t like about it.

Going beyond the standard informational interview questions, he also asked them about specific organizations he was interested in. Had they heard news about the organizations and what was going on with them – growth, change, etc.? How did people get hired there? Did this person recommend working there, or warn against it? Often a contact would introduce him to someone connected to an organization that interested him.

Was this whole process easy or hard? Fun or not?

I asked Dan whether he’s an extroverted person who loves reaching out and meeting lots of people. The answer was – no!

“I am absolutely an introvert,” he said. “I had to force myself. I set a numeric goal: at least three info interviews a week.”

The first couple of interviews were the hardest, so he started with easy ones first: former work friends and a mentor. Once he had a few of these meetings under his belt it got easier.

“There were fun moments. I had a lot of great conversations. It was interesting to hear about people’s career journeys. People really opened up.”

“And it got me out of the house and kept my spirits up.”

How did all these info interviews lead to his current job?

Ultimately a contact introduced him to an executive at an outstanding organization he had admired for quite some time.

“I had to ping [the executive] three times before she got back to me. Finally I had a great 15-minute phone conversation with her as she was unloading groceries, and then a few weeks later she sent me a listing for a consulting job. That ended up being my source of income for six months, and finally turned into the job I have now.”

Dan now works in an organization he has long wanted to join, doing work he loves, with the strong educational focus that’s important to him.

How did he feel about starting as a consultant?

The words “consultant” or “contract” raise a shudder of discouragement from many job seekers. I asked Dan how he felt about taking this role.

“Well, I didn’t want to be a contractor; it was a little uncomfortable and strange. But oddly enough, now as I look back on it I sometimes think ‘Hey, it was nice to work from home in my pajamas.”

It may seem like 32 informational interviews are a lot, but Dad only did about three a week (over a period of three months). Other job seekers have filled their schedules with one or two meetings daily, with the result of being hired within a few weeks.

Informational interviews are a form of networking, which is the fastest way to get a job. Not to mention the fact that the word-of-mouth opportunities you discover are often better jobs those that are advertised! Bonus tip: When asking someone for an informational interview, don’t call it that. Tell them you’re doing some career research and ask for a brief meeting to get their advice. That seems to get more “Yes, sure” answers than requesting an “informational interview.” Now, go forth and converse!