Afraid to Make a Career Change? 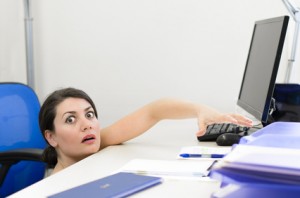 Are you hanging onto a job you don’t like, because you’re afraid of looking for a better one?

Why is it that the fear of change so often trumps the desire for fulfillment?

Human beings have a built-in tendency to be anxious and risk-averse – what  neuropsychologist and author Rick Hanson calls the “negativity bias.”

“The nervous system has been evolving for 600 million years, from ancient jellyfish to modern humans,” wrote Hanson.

Our ancestors had to make a critical decision many times a day: approach a reward or avoid a hazard — pursue a carrot or duck a stick.

Those “sticks” were potentially fatal: dangerous wild animals, physical attacks from competitors, starvation. The “carrots” were rewards like food, socializing and sex. (Still popular after all these years!)

So a risk-averse caveman might fail to take a risk at killing a mammoth one day, but live to hunt again the next day. While a too-daring caveman might just die young.

You can see how evolution favored risk-averse people.

Do we really need to be that fearful now? In terms of looking for a new job, we may be terrified of rejection, failure, stress, disruption – but these problems are survivable.

Fear is very unpleasant, and there are ways to decrease it, for example by working to change the beliefs that are making us fearful. But some fear will probably persist, so we also need to learn to live with it.

The key is, we can choose not to let it rule us. We can start doing whatever it is we would do if we weren’t afraid.

Make a plan, take steps toward your goal (even “baby steps”!), and find sources of support – a buddy, a good self-help book or a career coach. Do it even if you don’t feel confident.

Your mind is going to worry and fear, in a misguided effort to protect you. There’s no need to get angry about that. In fact, appreciate your mind for wanting to protect you.

Fear doesn’t have to stop you from making that career change. Start doing what you really want to do.

This post was originally published in October 2013 and has been updated.