Getting a Job: How Long Will It Take? 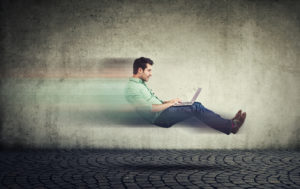 In the past there’s been a rule of thumb among career coaches that finding a job takes one month for every $10K of salary. In 2018 it’s been a lot faster than that: in one survey of recent hires, 58% percent said their job search lasted two months or less.

So that’s how it has gone for other people. Now, let’s talk about the real question.

What can you do to get your next job as soon as possible?

The answer is: Spend your time and effort on activities that have been shown to work. I could write a book about what works – and how we waste time – but for many job seekers the most crucial factor is how you spend most of your time: job boards or networking.

Don’t be a slave to the job boards.

I am not saying you shouldn’t reply to suitable openings you find online. But only about 20% of jobs come from this activity, so why spend more than 20% of your time on it?

(And if you’re going to do it, be efficient: Set up saved searches on metasearch engines: Indeed and LinkUp, which search thousands of job boards, and have the results emailed to you. And don’t waste time and energy replying to jobs that aren’t a strong fit.)

A large percentage of job offers – maybe most of them – come about through networking. If the mere mention of networking makes you want to throw up your hands, identify what the problem is and seek a solution. Don’t decide “It’s not for me.”

Networking is not just for extroverts. You can learn to do it well. You can even enjoy it. Get really curious and analytical about the subject of how you can become a solid networker. For a start, read my review of a very helpful book called The 20-Minute Networking Meeting.

Rebalance how much time you spend networking versus applying to jobs online, and you can celebrate a big step you’ve taken toward getting a great job sooner.

This article was originally published in November 2017 and has been updated for timeliness and accuracy.

Afraid to Make a Career Change?

Job-hunt in December! Here’s Why.