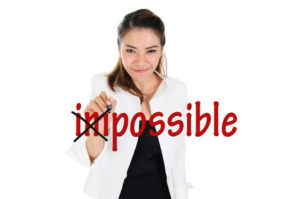 What do you do when you can’t exactly answer the question that’s been asked you in an interview?

Sometimes you need to reframe the question, to look at it in a less obvious way.

In other words, you come up with an effective work-around – like those clever ones that get you past various roadblocks in your day-to-day work!

Let’s say an interviewer asks you this:

Tell me about a time when you had to work with someone you really disliked, or who disliked you.”

Maybe that’s never happened to you. If you’re like Will Rogers (“I never met a man I didn’t like!”) – or you just haven’t worked with very many people! – then I guess it’s possible you have no answer to this.

Or maybe you just don’t feel it’s wise to admit to disliking or being disliked. Your hunch is probably right on that!

“Well, I had a co-worker who was difficult to work with, because he would take up a lot of my time with lengthy chit-chat. I don’t know if I exactly disliked him, but I had to manage my time without alienating him. The way I dealt with it was…”

This is fine. You’ve addressed the employer’s concern – whether you deal effectively with difficult behaviors – while presenting yourself as someone who likes people.

Here’s another example. In a mock interview session with a client recently, I asked (in the role of interviewer):

What are three areas in which your past employer wanted you to improve your work?”

My client could only remember two, because it had been several months since he left the job.

I suggested that he name the two areas his employer had identified – and how he had addressed them – plus one area he had identified for himself and successfully improved upon. This would address the interviewer’s real concern, which in this case is not whether the candidate can happen to remember three items, but whether he effectively accepts and uses feedback.

Of course, if you’re needing to reframe every question you come across, there’s probably a deeper problem. You may be seriously under-prepared. You may need to come up with a list of stories to tell in answering interview questions. You could probably benefit from interview coaching (as most job seekers can, in my admittedly biased opinion).

Your intention is crucial. If you’re intent is to dodge the question you are likely to be perceived as evasive. But if your aim is to authentically address the interviewer’s underlying interests and concerns you will project common sense and good judgment.

Used sparingly, reframing can enable you to proceed smoothly instead of being stumped. It also demonstrates creative-problem-solving and communication skills that are highly relevant to most jobs.

Address the interviewer’s interests, reframe as needed and proceed with confidence!