Few conversations are packed with more pressure–and opportunity–than a salary negotiation. Many job seekers fear that discussion and avoid it by simply saying “yes” to the first version of the job offer.

These tips came from an article on Glassdoor based on the book Fearless Salary Negotiation by Josh Doody. My blog readers will be familiar with many of Doody’s points, such as not committing to salary figures before receiving an offer (and here’s an infographic about what to say instead). But I wanted to highlight some insights I haven’t focused on before.

“No” and other negative words.

“No” is one of the most common words in the English language. It’s useful in many ways. But in negotiation, negative language can make people defensive, interfering with the positive rapport and collaborative spirit that lead to win-win solutions. Instead, say things like “I would be more comfortable with…” or “Here’s another option…”  It may be best to avoid any language more negative than “that doesn’t work for me” or “we haven’t arrived at a win-win yet.”

Think these are weasel words? Just because you’re not saying the word “no” doesn’t mean you’re accepting the current offer.

Let’s say you the salary they’re offering is a bit low, and they’ve informed you that the first opportunity for a merit increase would come a year after hire. You’ve gotten as far as you can in improving the salary offer but it’s still a bit low, so you’re asking for a promise of a salary review six months after hire. The tip is: Do not say “try,” as in “let’s try to reevaluate at that point.” Likewise, if you get a “try” response, like “we’ll try to do that,” the chances are good that it will never happen. Get a firm commitment. As Yoda said in the fifth Star Wars movie, “Do or do not, there is no try.” Don’t let them weasel out.

And don’t say “later,” as in “we can talk about tuition reimbursement later, after I start.” You will probably never again have such a strong negotiating position–they want you and they don’t yet have you–so now is the time to get agreement on the benefits, perks and working conditions you want.

Let’s not make absolute rules here. For example, flexible work schedules, a very popular perk, are often negotiated tentatively, with language like “That should be all right” or “Let’s try that out and see how it goes.” Often the flexibility becomes a firm part of the job once it’s clear that you’re not going to abuse it.

Salary negotiation is an uncomfortable process. At times your negotiating partner may be unhappy with a request or counteroffer you make, and it’s tempting to make nice with an apology. This is a mistake for two reasons.

First, it can signal to  the recruiter or hiring manager that you might be willing to back down, and that could cost you money or benefits that you could have had. Second, there is nothing wrong with negotiating; it’s a normal part of professional life. By all means be warm, friendly and appreciative throughout the process, but don’t apologize for doing business.

So that’s what not to say. Here’s some guidance on good language to use in salary negotiation.

How should you ask for  a bigger salary, more vacation, a later start date and so on? What kind of language is effective?

To answer those question and make negotiation easier, I’ve created a Negotiation Template that helps you plan your negotiation discussion, including which areas of the offer you want to negotiate (because there’s no reason to stop with salary), how to introduce and justify your “ask” in each area, some great open-ended questions that encourage win-win thinking, and tips for following up after the initial discussion. You can download it for free when you subscribe to this blog. 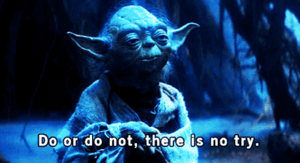