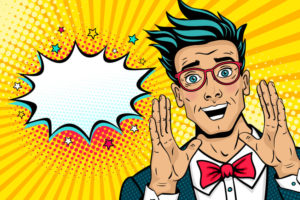 Before I became a career coach I was, at times, a job seeker. I was always a bit puzzled by the idea that I should “ask for the job” at the end of an interview.

How would that sound? “Will you give me this job, please?” Laughable. Depending on the tone of voice, this could sound either like begging or an impatient whine! Then I imagined just bluntly saying, “I want this job.” Better, but abrupt.

And what were they supposed to answer? “Oh, well, now that you ask, sure!” Yeah, right!

A Pet Peeve of Interviewers: “I can’t tell whether he’s interested!”

What it’s really about is this: at the end of any interview, the interviewer needs to know you’re seriously interested in moving forward in the process. If you’re not, they don’t want to waste time on further discussions.

They can’t assume you’re interested just because you showed up for the interview. People often interview for jobs they’re not very interested in, either because the role might turn out to be better than it sounded in the posting, or even just for practice.

If this is the final interview before consideration of an offer, they need to know you want the job. Even if you’re still not sure the salary or specifics are going meet your requirements, if the job itself is something you’d like to do, say so. The rest can often be negotiated.

Examples of “Asking for the Job”

This is how asking for the job might sound.

You may have heard of bolder ways of asking, like “So, have I got the job?” In sales an approach like this may be called for in order to demonstrate your aggressive sales closing technique, but for most roles a gentler statement like those above is best, in order to avoid putting the interviewer on the spot.

Job seekers are quite understandably anxious about sticking their necks out by asking for the job. If you ask yourself why, you may notice that you’re worried about what you’ll hear in response. So let’s get you prepared for the possibilities.

First, it’s highly unlikely that they’re going to say no right on the spot. If this did happen you could say calmly, “Well, that’s a bit of a surprise.” (Smile.) “I’m interested in knowing your reasons for that decision.”

The much more likely response is: “That’s good to know, because we’re very interested in you as well, and we’ll get back to you within the next (few days, couple of weeks, etc.).” You then say something like “Great!” Pretty do-able, really.

Now remember, you’re not a mind reader. Decide right now that whatever they say, you’ll accept it with an open mind and a confident smile. Practice that in your mind, or even in a mirror. After you’ve done that you may find that you’re feeling less shy about saying you want the job.

I hope the above gives you a more workable view of what it means to ask for the job at the end of your job interviews. For more tips, read my post on what to say at the end of the interview.

Your Job Search Checklist for 2020