Interviewers Can’t Take Your Word for It 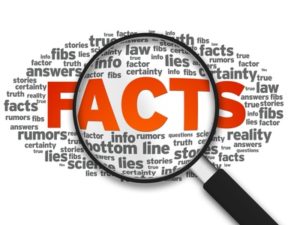 Even if you weren’t lying, many of the claims job seekers make are matters of opinion. Why should the interviewer trust your opinion of yourself?

I tend to believe my clients when they tell me about the things they’ve accomplished. But then, I’m not risking thousands of dollars in staff time and lost productivity, as employers are – every time they make a hire. If employers seem a bit paranoid, they have reason to be.

Employers want evidence, but not necessarily the kind you’d need in a court of law. Sometimes it’s enough just to tell the story in a way that would be hard to fake. Whatever claims you make, back them up with specifics. If you tell about a project you did a good job with, paint the picture with specific details so the employer gets a sense that the story is real.

If you improved customer service, what are the metrics that prove it? Did 98% of clients renew at the end of the year? If you kept your department running smoothly after the manager quit, what does “smoothly” mean, specifically?

Another way to give “evidence” for your abilities is to have the praise coming from someone other than you. Getting excellent recommendations on your LinkedIn profile, well in advance, is one way to do this. Another is to quote someone else word-for-word, especially if you can back it up with a reference later.

I recently helped a client – I’ll call him Jim – prepare for an interview for a project management job. He is intensely excited about the job and has outstanding skills, but the results of his work are sometimes difficult to quantify. Nor does he have any contacts inside the organization. So how will they know it’s true when he tells them how well he has performed?

“Partly from what people say to me,” he said. “My last boss used to say ‘Anytime I ask about any project, Jim instantly knows all the facts, the status, and any special considerations. He’s totally on top of it.’ He’s giving me a reference, too.”

References are generally a last check, once the decision has already been made. The glowing remarks of this supervisor may never be heard unless the employer can hear them before making a decision.

“Bring him into the interview,” I said, “by mentioning his name and that he’s a reference, and then quoting exactly what he says to you.”

Provide evidence to back up your claims. This will make a huge difference in your interview skills.

This article was originally published in 2013 and has been updated.